Mchungaji Kundi Moja (MKM) was established in 1988 to plant churches among the unreached people groups of Kenya where there has been little Christian impact. Aiming to make Christ known and worshipped in a culturally relevant way, MKM sends church planters to work among these unreached groups. Their focus is Muslim outreach and community development in East Africa and the Sahel.

Mchungaji Kundi Moja (MKM) was established in 1988 to plant churches among the unreached people groups of Kenya where there has been little Christian impact. Aiming to make Christ known and worshipped in a culturally relevant way, MKM sends church planters to work among these unreached groups. Their focus is outreach and community development in East Africa and the Sahel.

Kenya has the highest percentage of Christians of all the African nations with more than 82 percent. This leads many to believe the task is finished in Kenya. Yet, despite its strong Christian base, there are still a number of people groups where the Church has made little impact. Residents in these unreached areas feel they have suffered marginalization since the time of the colonial government and feel isolated from the majority of Kenyans. Many of these groups are strongly Islamic and have a history of being hostile to Christianity.

Islam has been operating passively among Kenya’s 41 million people for many years. A strong Christian presence has kept it from taking a more dominant and visible role in Kenyan society. However, there are places along the coastline and northeastern borders where the Islamic faith is growing.

The vision of our partner, Mchungaji Kundi Moja (translated “Shepherd of One Flock”), is to equip the saints to minister a build the church among these marginalized peoples. Today, more than 60 cross-cultural workers are active throughout Kenya, Tanzania, and Mozambique.

In addition to Kenyan tribes, Mchungaji Kundi Moja is burdened for refugees who have been driven into Kenya by war, famine, and extreme poverty.

Never miss a fresh update - subscribe to this Ministry Updates by clicking "Follow" to the right and we'll email you whenever a new update is posted!

Our ministry focuses on giving vocational training to people in our church to help them provide for their family’s needs. This is holistic ministry, as it helps people physically, while…

Our ministry held a discipleship training recently for 63 people, 33 men, and 30 women, from different churches and areas across the region. The response was good, but we had…

Every Experience is an Opportunity!

My name is Jaali*and I serve as an evangelist among the A* people group in Kenya with Mchungaji Kundi Moja. I also disciple new believers in their newfound faith.  Recently the Lord has…

Absko* and his family joined the team, working among a semi-nomadic people group. They entered after undergoing successfully cross-cultural missions training at the Center for Mission Training and completing their…

We thank God for His grace and favor as we continue serving. The Orma are a semi-nomadic people group who live in South-Eastern Kenya. They are the remnants of once-powerful…

The Locals are Warming up to the Non-locals Our ministry has four full-term missionaries and two interns who were with us from September 2018 through the end of December. Since…

Leading Well Despite the Risk

On the first of November a team of four missionaries and four children serving on the field were evacuated by Missionary Aviation Fellowship aircraft from the field. The security situation…

Transforming Communities through their Children

Our academy was started in 2000, after we were sent by MKM to be missionaries to the Somali people. At that point there were no good schools among them, and…

God Uses Virus Outbreak to Bring Healing to a Village

A testimony from one of our ministry workers on the field: My walk with God is going well, and every day I depend on him to lead me in making…

Be careful what you pray for!

Rain is a natural blessing from heaven. Even before Christianity came to Africa, the absence of rain has always been associated with offending the spiritual realm. Last year Kenya was…

MKM plants churches among unreached people groups in East Africa where there has been little Christian impact. Its vision is to equip the saints through training, mobilizing the Church worldwide in response to the challenge of Islam, and mentoring believers from Muslim background. 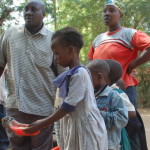