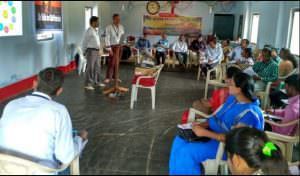 K* is a town in Eastern India where we are working through the churches to transform communities. Our neighbor has four daughters from ages two to thirteen. Their father comes home drunk every night and physically fights with his wife and elder daughter, while the other three children watch with loud wailing. The children go through this trauma every other night. When this incident was shared with the pastors and the church leaders, they shared that this is a common occurrence in their neighborhood. The abuse and trafficking of children and women is very common in this predominantly tribal community.

Under this context, a three-day training program on Life Skills for Child Protection was organized for the pastors and church leaders. Thirty-one women and men representing twenty-two churches attended the training. The following issues were covered:

All of the participants shared that this was the first time that they had been trained to deal with community issues as a church. The sessions were conducted in a participatory and activity based way, which was new for the participants (rather than just preaching and passive listening). At the end of the training, it was planned that they would conduct these trainings to the youth in their churches and communities (through ten groups involving eighty children). After three months, a follow up program was planned to train them on the remaining six life skills.