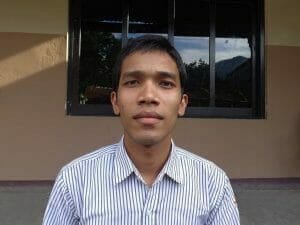 Gurratan* is from a low-income family that lives in the area where an earthquake hit Nepal in April 2015. Society looked down on him and his family, because of this, they had a hard time relating to others and finding happiness. His mother had poor health and was sick frequently. Their family often took her to different witch doctors and medical doctor so she would be healed, but nothing seemed to work. No one was able to help. Gurratan also became ill, which caused anxiety for the entire family. They were desperate and wanted out of their difficult situation and to find happiness. They were discouraged since they didn’t get any relief from all the places of worship they visited.

One of the neighbors of his village who is a believer told them about Jesus. She said, “If you believe in Jesus, He may heal from you from sickness.” Gurratan’s family were desperate and willing to try anything because of their situation, and since they couldn’t get a solution anywhere, they decided to try this ‘Jesus.’

Slowly they began to experience the love of Jesus. Both Gurratan and his mother were healed from their sickness and began to grow in the Lord. They have together found the joy and peace in Jesus. Now his family is a happy family in the village.

He came to take three months of residential leadership training in our Training Center. After completing training, he returned to his village and began to lead in the church and continued his secular education also. He was looking the best way to work with and enter into the community. Gurratan wanted to do some social work for society and show the love of Christ to unreached people. A devastating and deadly earthquake caused many people to become homeless in that area, as well as many deaths. People of that village were also economically poor.

The purpose of this training is to encourage women to start a small business in tailoring which will help them to raise their income. After this program registered in the district and began training, local people are favorable for the program, and it makes it easy to show the love of Christ to them.

Gurratan is exceedingly thankful for the training that was offered which has enabled him to influence his people in a more significant way.