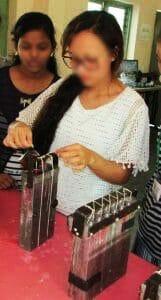 Nivaan* is from one of India’s northeastern states.

She is well educated and holds a BA in English Literature. In 2016 she attended JVI’s Master Trainer program under IWILL (Indian Women in Lord’s Labor). Nivaan says that the training taught her many practical, helpful things such as computer skills. She also learned ways to help her reach the unreached people groups, as well as income-generating bi-vocational skills. “The training at IWILL changed my perception of missions,” says Nivaan.

After the training, she gathered together some young adults from her church and shared with them what she learned so they would be empowered as well. Nivaan and the youth became very intentional about praying and fundraising. When they were ready, they visited villages on the borders of unreached states. They stayed with a Christian family and witnessed on weekends to people in the villages for three months. The younger generation responded well to the Gospel. Eight youths started attending the weekly Bible study with the local Christian family.

Recently Nivaan obtained a part-time job with the local government. She continues to raise money to lead a team of young people to another state this upcoming March. This trip will be to one of the least reached states in the area, an area that is hostile to the Gospel.

She is training the group of young people to understand different people groups and how to minister to them. She would like to bring some of the youth who have been trained as teachers and paramedics on the trip as well. “Though the task seems difficult, I trust in the Lord to make this happen for His glory,” says Nivaan.