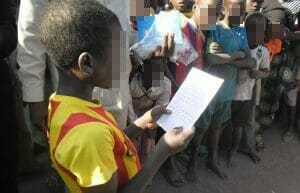 The two new classrooms at the center were inaugurated in late September in the presence of Rene, the Area Director for West Africa. Some traditional leaders, as well as Christian leaders, honored the event. The population was also massively mobilized.

Elie, a pupil said: “Since 1991, our elder brothers and sister had to have class under shelters. A few years later, part of the school was in huts built with mud bricks and roofing in chaff. However, God remembered us, as He remembered the sons of Israel who were in Egypt. Through Partners International He allowed us, the third generation, to study in durable classrooms.”

Mahammad, another pupil, added, “We thank the entire Partners International staff, including papa Rene and his wife, who elected to come in person in order to attend the key event. May God bless you in Jesus Christ.”

Please pray with us for: