There is no greater joy than to prove again and again the Lord’s faithfulness in the lives of His own and for the needs of the work. 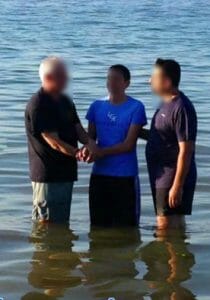 We recently had baptisms for three people. Two from nearby cities. Each one with a beautiful testimony. Taslimah* had been coming to church for years but was afraid to put her trust in the Savior until four years ago. She told us how 20 years ago the Lord had appeared to her in her dreams, but out of fear of her relatives, she chose to wait to make the decision to follow Christ. For years she struggled with having one foot still in the world. Finally, because of dissatisfaction with life, she returned to her Christian faith and was recently baptized bearing witness to the work of the Lord in her life.

Her husband Arvio* came to the church because of the changes in his wife four years ago. And then Arvio’s sister, Nijah* was baptized this summer. She and her husband Mufid* have been faithful believers for years. She had a cancerous tumor of 55 mm. She was being treated by the doctors, as well as receiving prayer. Two weeks ago she was tested again, and the tumor had been reduced to 37 mm. Four days later at her doctor’s check-up, it was completely gone!

Brother Fadel* also was baptized. He was a sailor who had been given a New Testament about 20 years ago. Fadel always assumed that having this in his possession was why good things happened to him. He seldom read the New Testament until a couple of years ago when he started to investigate. He began attending a church and has brought many people to the church already.

In all circumstances, we see how God does not leave those in whom He has begun a work. The Holy Spirit continues to work in them and eventually, with God’s grace, they yield to His call. Glory to God!