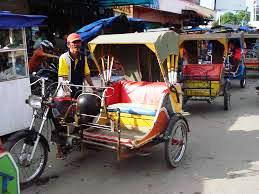 I thank God who has been taking care of me and my family up to this day. I’m a church planter with Cahaya Suku in Indonesia. I went through a challenging situation last month when I tried to introduce the good news of salvation to a pedicab driver. This man was Mr. Loppa, 46 years old and respected in his neighborhood. Actually, I had heard a lot about him from his friends and I was eager to meet him. Unintentionally, we met last month in a park where he usually waited for passengers.

I greeted Mr. Loppa and got acquainted with him. He was open and welcomed me nicely. Seeing that he was friendly and open, I began sharing with him about spiritual things. He seemed interested in my story from the beginning . . . at least until I got to the part about Jesus’s crucifixion, death and resurrection.

Suddenly, in a loud voice, he said, “I do not want to be a Christian!” His face was very fierce. I tried to calm him down by saying that believing in Jesus doesn’t mean to join a religion. I assured him that religion cannot save any person from death, only Jesus can. Instead of being calm, he got even angrier and yelled, “I told you I don’t want to be a Christian! Then, he left in a huff.

His friends who were sitting close by quickly approached me. They told me that Mr. Loppa was having a bad day because he’d had a fight with another pedicab driver the previous day. They were competing to get passengers and Mr. Loppa wanted to get even with that guy. I told his friends that fighting is not a good solution in dealing with problems, but they said Mr. Loppa insisted. Then I excused myself and left.

The next day I invited Mr. Naro, one of the new believers I have ministered to lately, to study the Word of God in an empty house. The owner of this empty house had asked Mr. Naro to check on the house sometimes, so I thought we could meet and study there. To my surprise, when we got into the house, Mr. Loppa was there! He stared at me angrily with a knife in his hand!

I tried to calm myself as I carefully approached him. I hugged him and told him that I love him. I was scared, but finally, my approach seemed to calm him down. He spoke to me kindly. I was still really scared.

Mr. Naro and I started to study the Bible with a feeling of uneasiness. We did not learn much about being a disciple that day. Soon I said goodbye and went home.

When I got home, I told my wife what had happened. She wisely suggested that I find another place to meet Mr. Naro next time we want to study the Bible. I was very grateful for God’s protection that day.