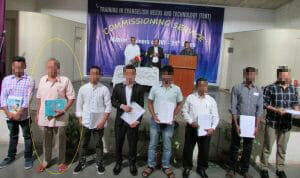 technologies. Last month, nine men were commissioned after going through nine months of this training. They are from seven different states of India. These are the subjects that were taught in these nine months:

One of these recent graduates is from a people group that has been categorized as unreached. He came to know the Lord when he was seventy years old through one of our master trainers. He is very excited that he found the truth and is very curious to learn the Word of God. He is also passionate about sharing the Gospel with his own people group. At that age, we were surprised to see the zeal and the energy he had.

He recently went back to his village to share the Gospel with them. In this village, it is a cultural norm for people to listen to the elderly members of the community, so people listen to him. This is a real opportunity for the Gospel to reach many people that previously had no access to it. He says, “I don’t know how many days I have left, but I want to take each moment seriously to share the Gospel with my own people.”

May the Lord continue to bless this man and the ministry that he is involved in to reach his own people group.