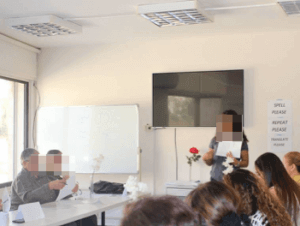 Last week, we started our second English course and an art therapy program for our beloved Iraqi refugees. In the English course, we aim to teach the women ‘survival English’ so they can easily communicate with others when they immigrate. These beneficiaries range from fourteen years old to more than seventy years old. Some took English courses in their schools back in Iraq, but many had received no education at all.
Two old, yet very young at heart, ladies were sitting together in the very front seats. I assumed that they were in their seventies. Neither had received any education, but I could see how eager they were to learn. They had this sparkle in their eyes that I had never seen before. It was a sparkle of hope that said maybe, in spite of all the circumstances they have been through, everything would work out okay.
In our English courses, we try to cover all skills, including reading, writing, speaking and listening. These two elderly women were able to repeat some English words after me, and by the end of the first hour they were able to maintain a small conversation. When we started with the classwork in the second hour, neither of them were comfortable with the idea of writing. However, there was a huge smile on their faces when they held their pens and wrote their names in English for the first time ever. They both liked how their names looked in English, and asked if they could copy them again. Although it took them some time, they were able to write out a whole conversation on paper by the end of the class and were both proud of their achievement.
As they waved goodbye, I could still see that sparkle in their eyes. I am sure it was not only a sparkle of hope, but a sparkle of joy and peace. Peace despite the war, joy despite all their losses, and hope to come learn something new next time. The sparkle in their eyes is what keeps us going here at Purpose Haven.