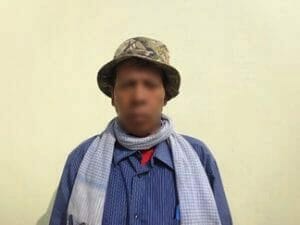 Gaven*, a sixty-year-old man graduated in the 23rd group of the ministries three-month leadership training.

Before taking our leadership training, Gavan* used to drink alcohol and argue with his family. People around him didn’t like him, including his family and neighbors. His wife had already accepted Jesus as her savior and regularly attended service at a nearby church. She always encouraged him to go to church with her, but he never did.

He learned magic and to control the evil spirit along with worshiping idols. He felt strongly about his beliefs. During the winter season, he saw a mustard flower and worshipped it as an idol every morning. He saw some things in the idols legs every time and thought does idol walk in the field? He decided to test the idol to see if it did walk and he stayed awake the whole night watching the idol carefully but it never walked or moved anywhere. After that night he no longer believed that the idol walked, moved and did everything, this allowed Gavan to stop worshipping the idol or any other idol.

Since there was a lack of leaders at his local church the pastor encouraged Gavan to do a three-month training, provided by our group at the training center. He attended the training and learned how to have a personal relationship with God, study the Bible and preach. Along with many things which were very helpful in his personal life and church leadership.

After that, Gavan started learning about Jesus and became convinced that He is the Lord and Savior. He began to put his trust in Jesus and accepted Him as his personal savior and he chose to get baptized. He slowly left the habit of drinking alcohol and change was evident in his life. Villagers were surprised to see how much his life changed. Gavan now shows love to his family and his home is a peaceful environment.