Our partner DFC, a church planting ministry working to bring the love of Christ to north Sumatra, Indonesia, below, a worker shares the story of selvy. A former drug abuser who came to faith in Christ while in jail in 2009.

Selvy’s story is one of the thousands demonstrating the power of your prayers and how your gifts to partner projects-like radio outreach, Bible, and church planter support-give people in the least Christian world new hope in Christ.

The DCF worker tells how she met Selvy: ”One day I was waiting to meet a friend. It was cold outside, so I went inside the nearby courthouse to wait. When I entered, I saw a young woman who looked pale and frightened.

Smiling and sitting beside her, I learned her name was Selvy and that in a couple of minutes she would go before a judge for a drug charge. 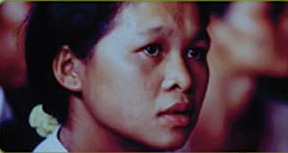 She was trembling and scared. I tried to comfort her and prayed for her, telling her about Jesus and how He wants to forgive our sins.
“I returned home but continued to pray for Selvy. A week later, I visited Selvy in jail. When I arrived, she remembered me but was confused as to why I would come to see her, someone she bardy knew. I told her, “A voice in my heart has told me to visit you. I believe it is God’s voice because He loves you and wants to help you.”

“Over the next hour, we spent time in fellowship, and she was so happy because no one else had come to visit her. Before leaving, I gave her a Bible and urged her to read it. I told her, ‘I know you are afraid, but when you read this book, you will have peace.’ I also told her about our radio program, ‘Knowing God’, that airs twice a day.”

Several weeks later, I visited Selvy again. She ran to hug me and was thrilled I had come again. She had been reading the Bible. She said that though she had grown up a Muslim, the Koran had never made sense to her. She said the radio program had become like a friend. I invited Selvy to accept Jesus as her Savior. She joyfully agreed and prayed to receive Christ in the middle of the jail. Tears came down her face as she prayed. A year has passed, and every week, I visit Selvy in jail. She has six more months to serve but she says she is not afraid anymore. Even though my body is in jail, my soul has been set free.